For one day this summer in downtown Portland, Oregon, the nation's leading health policy experts will gather to share their perspective on one of the most pressing issues of the day: Healthcare reform.

It's all part of Moda Minds, a leadership forum on June 16 convened by Moda, Inc., to focus on innovative strategies for transforming the quality and effectiveness of healthcare.

"With Moda Minds, our goal is to create a first-class opportunity for local leaders to explore important national healthcare topics, become inspired by meaningful ideas and seek new directions for the people and communities we serve," said Moda Health President Dr. William Johnson, who will facilitate the day's events at Portland's World Trade Center auditorium.

The theme for this year's event, "Healthcare Reform: The Road Ahead" is particularly timely and has drawn top thinkers in the health policy arena.

The heavy-hitters joining Moda executives to share their insights are Marilyn Tavenner, president and CEO of America's Health Insurance Plans; Topher Spiro, vice president for health policy at the Center for American Progress; and Lynne Saxton, director of the Oregon Health Authority.

These experts will share the stage with Moda CEO Robert Gootee in a panel discussion on the AHCA, the ACA and what we can expect for the road ahead, moderated by Scott Nelson of the government affairs agency Summit Strategies.

For more details about the Moda Minds presenters, see their individual bios below. To join the conversation in real time, follow #ModaMinds on Twitter. 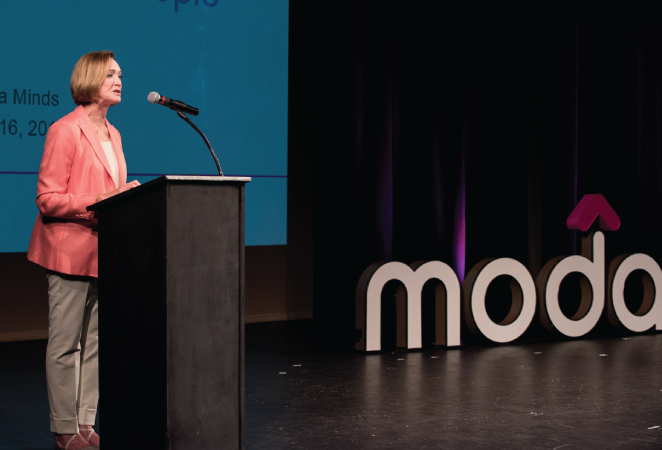 In her role at AHIP, Marilyn Tavenner leads the national association that is the unified voice for the evolving health insurance industry. Prior to joining AHIP, she served as administrator/principal deputy administrator of the Centers for Medicare & Medicaid Services. At CMS she led the implement the Affordable Care Act, including major health insurance reforms, Medicaid expansion and the establishment of state and federal healthcare marketplaces. Before she was appointed to CMS, she served as Secretary of Health and Human Resources in the cabinet of Virginia Gov. Tim Kaine. From 1981 to 2005 she was employed by the Hospital Corporation of America, beginning as a nurse and eventually becoming the CE0 in 1993. Tavenner holds a B.S. in nursing and a master's degree in health administration from Virginia Commonwealth University. For the past four years, Modern Healthcare has recognized her as one of the 100 most influential people in health care. In 2017, the magazine also named her one of the Top 25 women leaders in the industry. 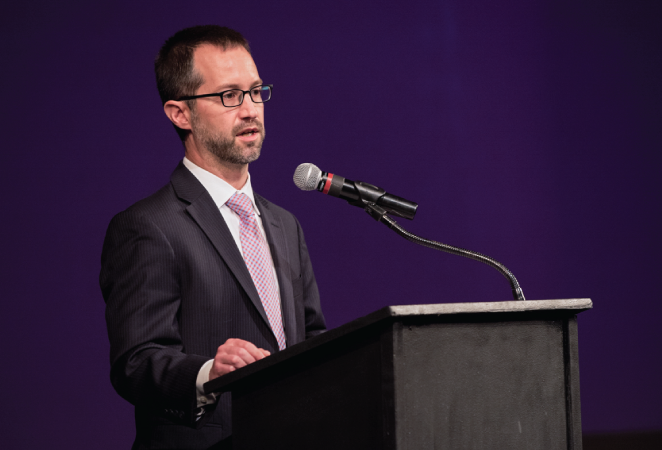 At American Progress, Topher Spiro leads a health policy group that includes former Obama administration official Zeke Emanuel, former Medicare administrator Don Berwick and Sen. Tom Daschle. Prior to joining American Progress, Spiro served as deputy staff director for health policy for the Senate Committee on Health, Education, Labor and Pensions, where he was part of the team that drafted the Patient Protection and Affordable Care Act and the Health Care and Education Reconciliation Act of 2010. He has also served as senior policy advisor for both Sen. Jack Reed and for the Senate Special Committee on Aging. In addition, Spiro was health policy director for the Rhode Island Healthcare Reform Commission. He holds a B.A. from the Woodrow Wilson School of Public and International Affairs at Princeton University and a J.D. from the University of Virginia School of Law. His work has been published in The New York Times, The New England Journal of Medicine, The Atlantic and The Annals of Internal Medicine, among others. He has also testified before Congress and appeared on National Public Radio. 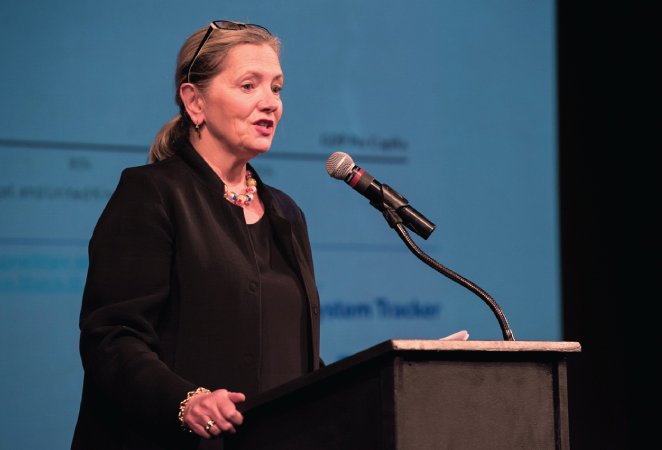 As leader of the Oregon Health Authority, Lynne Saxton ensures that the state protects and promotes the health of all Oregonians. OHA does so by setting policies that drive the delivery of care across the state and by providing access to health coverage for more than 1.1 million people through the Oregon Health Plan. Saxton's top priorities are to make the OHP work better for its members, improve the state's behavioral health system and to continue to transform Oregon's health care system to produce better care, greater access and lower costs. A longtime public servant, Saxton is active in community and civic leadership positions, including service on the Early Learning Council, the International Women's Forum and the Willamette University Board of Trustees. She also served on the Oregon Land Conservation and Development Commission and as chair of the Metropolitan Family Service Board. Saxton graduated with honors from Willamette University and attended the University of Michigan Business School Executive Program. She recently received the Gordon and Sharon Smith New Freedom Award from the Oregon Chapter of the National Alliance on Mental Illness. 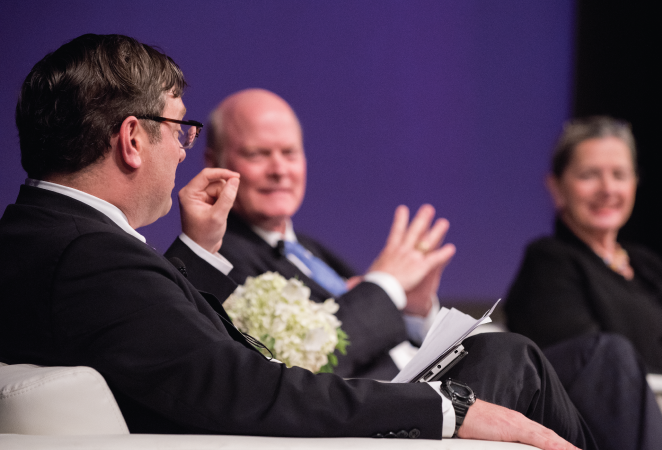 Scott Nelson has spent much of the last two decades working at the intersection of law, policy and politics. Before joining the government affairs firm Summit Strategies, he served as a policy advisor to Oregon Gov. John Kitzhaber and was the policy director for the governor's 2010 campaign. In the governor's office he worked on energy, tax, consumer affairs, business development and other key policy issues. He spent nearly five years in the Washington, D.C., and Portland offices of an international law firm, counseling clients on a range of regulatory and policy issues including tax, energy, trade and telecommunications. Prior to joining the firm, he served on the staff and campaigns of U.S. Sen. Byron Dorgan for several years, most recently as deputy chief of staff. He was also a Clinton administration appointee to the U.S. Department of Energy. He now represents clients in Oregon and Washington, D.C., on issues such as tax, environment, energy, trade and health care. He grew up in Corvallis, Oregon, and graduated from Carleton College in Northfield, Minnesota, and the University of Virginia School of Law in Charlottesville, Virginia. 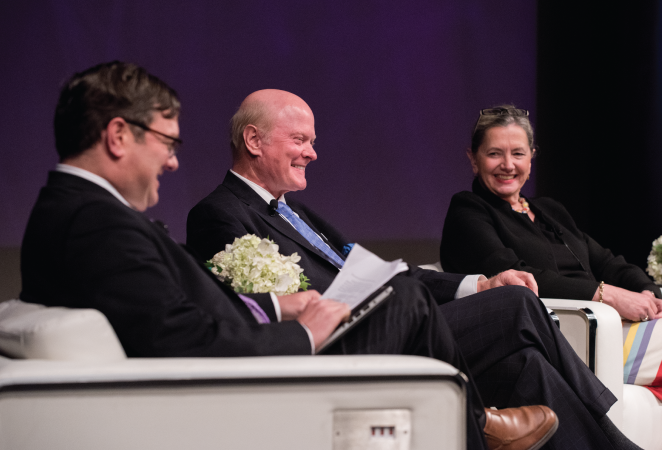 As president and chief executive officer of Oregon-based Moda, Inc., Robert Gootee is widely recognized as a thought leader and civic influencer in business ethics, environmental sustainability and more-equitable corporate cultures. Born and raised in Texas, he earned an undergraduate degree in forestry and a master's degree in business administration from Texas A&M University before launching his career as a certified public accountant. He held several financial management positions in the high-tech, environmental, healthcare and insurance industries before joining Moda (then ODS) as vice president of finance in 1988. Since being appointed president and CEO in 1998, Robert has led the company through dramatic growth to annual revenues of more than $2 billion. With more than 1,500 employees in Oregon and Alaska, Moda today is a multifaceted organization offering a wide range of medical, dental, pharmacy and vision plans. Company subsidiaries include Ardon Health, PayLess Drug, BenefitHelp Solutions, Dentists Management Corporation, Dental Commerce Corporation and Moda Health Services. In 2013, Robert signed a landmark 10-year community investment agreement with the Portland Trail Blazers. In recognition of Moda's commitment to that partnership, the NBA team renamed its arena, a central city landmark, the Moda Center. A passionate bicyclist, Robert frequently commutes on two wheels, but his environmental contributions extend beyond pedaling to Moda's headquarters in downtown Portland. He is a longtime supporter of The Nature Conservancy and has served on its Oregon board of trustees since 1998. 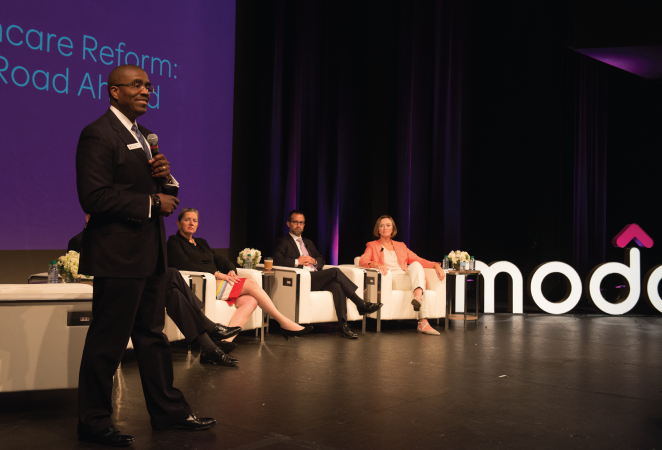 Dr. William Johnson joined Moda in September 2008 and provides leadership to Moda's healthcare services department, which includes provider contracting and relations, medical management, population health, medical informatics and Moda Health quality programs. He also leads the innovative healthcare engagement and ACO strategies, and provides oversight to marketing and branding. Prior to joining Moda Health, Dr. Johnson was in private practice for more than 12 years as a general/thoracic and vascular surgeon. He served as president and CEO of Surgical Associates, a Portland-based surgical practice, and is a fellow of the American College of Surgeons. Dr. Johnson also contributes to scientific literature. He has 20 publications in peer-reviewed journals and has edited and published four books. Dr. Johnson is active in regional and national healthcare initiatives, including the Oregon Health Leadership Council, the OBC Healthcare Roundtable, the American Health Insurance Plans (AHIP) HAS Leadership Council and Chief Medical Officer Committee, The American Association for Physician Leadership and the National Association of Managed Care Physicians. He served on the National Business Coalition on Health (NBCH), National Health Leadership Council, NBCH Value Based Purchasing Council and the Medical Director Advisory Panel of Johnson & Johnson Ethicon Endo-Surgery. He also was a member of The Foundation for Medical Excellence Kitzhaber Chair on Health Policy Advisory Committee. Dr. Johnson's undergraduate education was at the University of Southern California and Harvard, where he studied biology and advanced genetics. He received his medical degree from USC and earned his master's in business administration from the University of Tennessee, graduating with Phi Kappa Phi honors. He completed a fellowship in esophageal surgery and served as assistant unit chief in the division of Foregut/Thoracic Surgery at USC. In addition, he served as a fellow in cardiovascular surgery at Beth Israel Hospital, Harvard University, and is an affiliate professor of surgery at Oregon Health & Science University (OHSU). He currently serves on the Portland Trail Blazers Executive Advisory Board, The Nature Conservancy, The Foundation for Medical Excellence (TFME), and the Reaching and Empowering All People (REAP) Board of Directors. In addition, he is the co-chair of the Oregon Health Leadership Council (OHLC) Board of Directors.