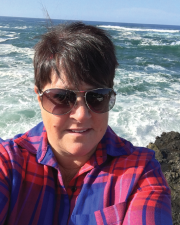 The late Shell Martin was dedicated to the Moda community as well as to her friends and family. “She was a caretaker, almost to a fault,” said coworker and friend Trin Cramer-Eves.

More than 90 Moda employees will hit the road for Portland’s Shamrock Run this weekend, but the first person to sign up for Team Moda will only be there in spirit.

Ask anyone who worked with the late Shell Martin and they’ll tell you: She was one of a kind. A longtime trainer in Moda’s Medical Claims Customer Service Department, Martin had a personality that stood out even on a team known for its friendly attitude.

“The thing about Shell was, you always wanted to be her friend. She was a spitfire,” said Vilay Thilavanh, who worked with her in Medical Claims.

When Martin passed away in November from complications due to epilepsy, her coworkers wondered how they’d cope with the loss. This weekend, they’ll channel Martin’s upbeat energy at one of the city’s biggest community events, taking part in the Shamrock Stride 4-mile walk as a tribute to her.

Martin signed up for the walk the minute Moda started putting together a Shamrock team. When her bib number arrived at the office months later, her Moda family couldn’t let it go to waste.

“Knowing Shell the way I did, I knew she would not want that bib to go unused,” recalled Medical Claims Manager Julie Williamson. “Walking together certainly wasn’t something we planned, it just happened this way.”

In the years when she worked at Moda Plaza, if Martin wasn’t at her desk all you had to do was wait for her laugh. Like a beacon, it broadcast her location throughout the building.

A loyal coworker and generous caretaker

Generous and outspoken, she would rally her team to represent Moda at community events year ‘round.

“The fact that she was the first to sign up for the Shamrock says it best. She loved this company so much and supported this community she was so, so proud of,” said Trin Cramer-Eves, Martin’s closest Moda friend and the one who will wear her bib on Sunday.

Martin also supported her team in quieter, but no less remarkable, ways. “She probably trained more than 200 people in this organization,” Cramer-Eves recalled.

If she noticed a young trainee didn’t have a professional wardrobe, or saw that someone’s family was struggling, Martin would find a way to gather up a bag of work clothes or put aside extra groceries. “She was discreet about it,” Cramer-Eves said. “She’d just pull them aside and say ‘I saw this, and I thought of you.’ ” 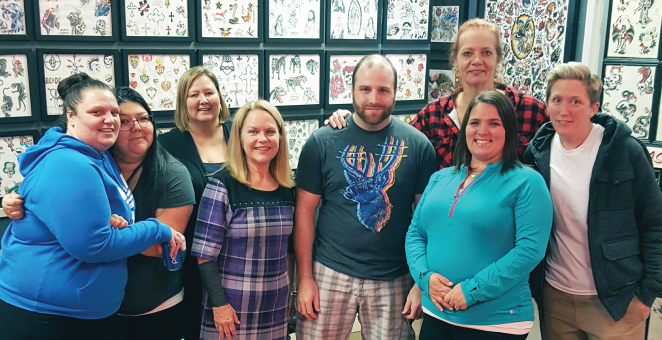 About a week after her death, eight of Martin’s coworkers improvised a memorial. They gathered at a local tattoo parlor and chose to mark their bodies with images she loved – seashells, flowers – and incorporated her signature into the designs.

“These have a very special meaning to each of us,” Williamson said. For her own tattoo, Williamson chose to reproduce a note that Martin wrote to Williamson’s nephew when he was going through a hard time.

“There is no true power or path,” it reads, “there is only you, as you are on your own spiritual journey – whether you like it or not!”

Asked to consider how they’ll feel on race day, Martin’s coworkers said it’s not really about them.

“This one’s for Shell,” Cramer-Eves said. “We do not want to be in the spotlight. This is about giving her one last one.”

Find us on all the popular social places.